What do tourists find most interesting about Melbourne?

Melbourne is a vibrant city with something for every person. Famous for its steaks and fresh local fish, it has world-class restaurants—among them Vue Du Monde atop the high-rise Rialto Tower, a gourmet’s delight second to none. And as home to people of 138 different nationalities—including one of the largest Greek populations outside of Athens—the city offers cuisines from every corner of the world.

Melbourne also has a rich theatre and music scene, art galleries and museums. Federation Square is full of galleries, restaurants, and cinemas as well as the famous colorful artistic graffiti-filled Melbourne laneways (narrow pedestrian walkways), many of which are populated with small bars and restaurants. Also, be sure to explore the Arts Centre, encompassing the newly renovated National Gallery and multi theater and recital centers on the bank of the Yarra River. The Old Melbourne Jail that once held notorious villains and bushrangers (highway robbers) is now a fascinating museum that displays the last used gallows. The beautiful Botanical Gardens in South Yarra will give you a wonderful glimpse into Australian native trees and flowers. Free tourist trams will take you around the city.

Melbourne is also the sports capital of Australia, with Australian Rules Football the dominant winter sport and cricket the main summer spectator event. The Melbourne Cricket Ground seats 100,000 sports-crazy fans, houses a sports museum full of interesting memorabilia, and runs daily tours when no matches are on. And the city is a golfer’s paradise, with many international level courses.

You’ll also find many friendly visitor information booths around the city. Australians are generally very welcoming, so don’t be afraid to ask people in the street for help or directions. You’ll see why several travel magazines have voted Melbourne the most livable city in the world.

What are the best Jewish sites?

The Jewish Museum of Australia in St Kilda offers a very well-designed visual history of Australian Jewry. The Holocaust Museum provides personal testimonies and ever-changing exhibitions. Along Carlisle Street in East St Kilda you’ll find many kosher bakeries, food stores, and butchers as well as a good number of Jewish book and Judaica stores. And there are many Jewish festivals—an annual Jewish film festival, an Israeli film festival, a summer Jewish LGBT festival, and soon, starting in 2014, the first Melbourne Jewish Writers festival. We also have Jewish choirs and a Yiddish theatre.

Can you give us a brief history of Jews in Australia?

Australian Jewry has a proud history downunder. Fourteen Jews were among the convicts on the first fleet aboard the Bounty that arrived on the shores of what is now Sydney Cove in 1788. The convict Esther Abrahams became the wife of one of Australia’s first governors (the British Queen/King’s representative). There have been two Jewish governor generals (representatives of the sovereign in Australia): former Chief Justice Sir Isaac Isaacs in 1926 and the much beloved Sir Zelman Cowan, who was called upon in 1977 to heal the nation after the divisive dismissal of the previous prime minister. His funeral two years ago at Temple Beth Israel, broadcast live on national television, was attended by government officials, the current and previous living prime ministers, and the current governor general. Another Australian Jewish hero and statesman, General Sir John Monash, led the Allied forces in the First World War. Much has been named after him, including Monash University.

Most of the Jews who first came to Australia arrived from England. Some were seeking a better life from the slums of London and other English cities; others were transported here by Her Majesty’s government to serve out criminal sentences, often for nothing more than stealing a loaf of bread. Next to arrive were Russian Jews escaping from pogroms and forced military service. Many of these immigrants went on to build successful businesses and professional careers as they assimilated into Australian society. It was not until after the Holocaust, when a huge influx of European Jews immigrated and created many Jewish day schools and community organizations, that the Jewish community revived.

Notably, Melbourne has had the largest number of Holocaust survivors outside of Israel. Australia opened its doors soon after the Shoah, and many survivors wanted to get as far away from Europe as possible. Most of the Polish survivors went to Melbourne and the Hungarians to Sydney.

Because of the very early Jewish involvement in Australian settlement and the number of highly respected and prominent Jewish personalities, anti-Semitism has been relatively minimal here. In 1947, Australia was the first country to vote in the United Nations for the establishment of the State of Israel. Today, Israel and Australia have very close relations in trade, research, and culture.

How many Jews live in Australia?

Approximately 130,000, mainly in Melbourne and Sydney, although every state capital city has a Jewish community. In recent years there has been a large influx of Russian and South African Jews as well as upwards of 20,000 Israelis, nearly all of whom are seeking a better and safer life in Australia.

Progressive Jews constitute about 20% of the Jewish community. Melbourne has four Progressive congregations, the largest of which, Temple Beth Israel, has 2500 members and seats 1800+ in the main sanctuary during the High Holy Days.

Each of the four synagogues provides a slightly different ambiance. At Temple Beth Israel in St Kilda, which holds services every Friday night and Shabbat morning followed by a nice Kiddush, you might find a meditation-based service, one that is all music, an alternative lay-led service, or one geared for families. It’s well worth a trip just to see the temple’s beautiful stained glass windows depicting all the festivals and Shabbat. Friday night services generally attract 200 members and visitors, and this number can rise considerably on Shabbat morning if there is a bar or bat mitzvah or other simcha. At the Leo Baeck Centre in Kew and Etz Chaim in Bentleigh, a warm, welcoming, rabbi-led service is available every Shabbat morning and for all festivals. Occasional Friday evening services at both congregations are followed by a dinner in the shul hall attended by as many as 60 people. At Kedem in Armadale, all services are lay-led and held on alternative weeks.

Most North American visitors would feel at home at any of Melbourne’s Progressive congregations. Our services have a good mixture of Hebrew and English, and our uplifting modern and traditional Reform music would be very familiar. All of our synagogues use the World Union for Progressive Judaism edition of Mishkan T’fillah, which has been adapted for Southern Hemisphere seasons and local sensibilities. It is customary for males to wear head coverings, and on Shabbat morning men and many women wear their own tallitot.

Visitors are most welcome to worship with us. Please make yourself known to the members at the door and/or to the rabbi. And let us know if you are celebrating a special occasion, so we can celebrate with you! 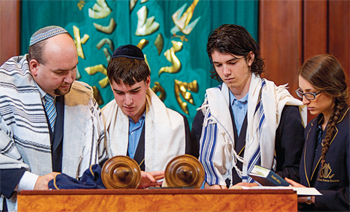