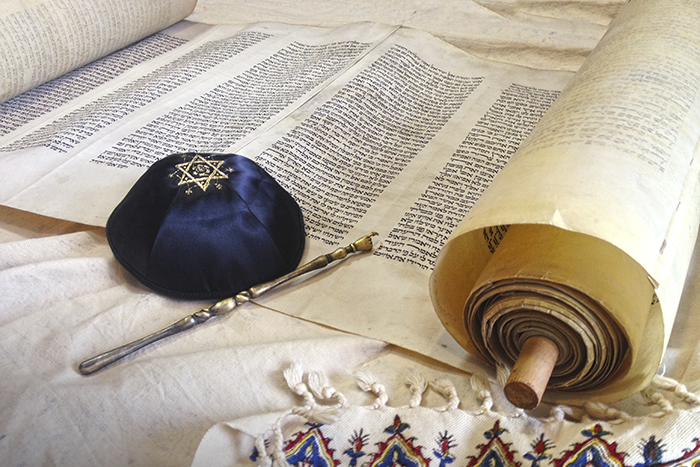 Editor's Note: Our holiday content is evergreen and revisited from year to year, and as such, not all customs and rituals explained on our site will be safe during times of social distancing. Please use your judgment and celebrate only in ways that are responsible and safe.

The symbolic message of the customs associated with Simchat Torah emphasize that the TorahTorahתּוֹרָהLiterally “instruction” or “teaching.” The first five books of the Hebrew Bible (Genesis, Exodus, Leviticus, Numbers, and Deuteronomy); the handwritten scroll that contains the first five books of the Hebrew Bible. Also called the Pentateuch and The Five Books of Moses. “Torah” is also used to refer to the entire body of Jewish religious teachings and insight.  represents our heritage and history, and links Jews to each other over many generations. The words recited at the end of reading each book of the Torah inspire and represent this history: Chazak, chazak, v’nitchazeik. “Be strong, be strong, and we will strengthen each other,” building a living Judaism through study, action, and commitment.

Sh’mini Atzeret, Hebrew for “eighth-day convocation,” is the name given to the day after the seven days of Sukkot. Leviticus 23:36 proclaims: “On the eighth day you shall observe a holy convocation.”

Sh’mini Atzeret, which occurs directly after Sukkot is a day on which Jews recite a special prayer for rain in the year to come – quite appropriate in view of Sukkot’s agricultural motif. This prayer is retained in the worship service until Passover. This "eighth day" of Sukkot, Sh’mini Atzeret, is a separate occasion in its own right. Although it shares some of the rituals of Sukkot, there are some differences as well. Along with the addition of the blessing for the rain, the lulav and etrog are no longer shaken in the sukkah, the blessing for dwelling in the sukkah is no longer said, and the YizkorYizkorיִזְכֹּר"Remember;" memorial service held on Yom Kippur and on the last day of Pesach, Shavout, and Sukkot.  prayer is said in synagogue.

During congregational Simchat Torah celebrations and services, the Torah scrolls are taken from the ark and carried by congregants around the synagogue seven times. During these seven hakafothakafahהַקָּפָה"encircle, round off, circle around, orbit;" procession of worshippers carrying Torah scrolls that circles the sanctuary; plural hakafot. , those not carrying a Torah often will wave brightly colored flags, sing Hebrew songs and dance. The singing, dancing, and flag-waving that accompany the hakafot symbolize the collective joy of Torah study and a commitment to lifelong Jewish learning.

The origin of making, decorating, and carrying flags during the hakafot is unclear. Some scholars hold that marching with flags recaptures the history of the 12 ancient tribes of Israel, when each tribe had its own banner. Other scholars believe this practice originated in the Middle Ages and was borrowed from certain Christian customs.

Some congregations also unroll an entire Torah scroll as part of the celebration and read from well-known sections or stories.

The Torah service is the focal point of the Simchat Torah celebration. One rabbi, cantor, or member of the congregation opens the Torah and reads the last section of the fifth and final book of the Torah, D’varim (Deuteronomy). A second person then opens another Torah scroll and reads the opening section of the first book of the Torah, B’reishit (Genesis). The selection from D’varim tells of the death and legacy of Moses, the prophet and leader of the Jewish people. The reading from B’reishit, the very first words of the Torah, recounts the story of God’s creation of the world.

In many synagogues on Simchat Torah, various members of the congregation are called to the Torah for an aliyah (“going up,” which refers to the honor of ascending the bimah bimahבִּימָהThe platform in the synagogue from which which worship services are led and from which the Torah is read. The bimah, usually raised, can be placed in the front or the middle of the sanctuary. to recite the blessings before and after the Torah is read). Other synagogues may call all the children who have not yet reached the age of bar or bat mitzvah for a blessing in front of the Torah. Before the entire congregation, with a tallit tallitטַלִּיתPrayer shawl; plural: tallitot spread above their heads, the children receive a special blessing from the clergy. In many Reform synagogues, Simchat Torah also is a time when children just entering religious school are blessed. This custom is called ConsecrationConsecrationקִדּוּשׁCeremony that marks the beginning of children’s formal Jewish study; often a synagogue- or community-wide celebration for children and families at the start of the school year; often held as part of Simchat Torah celebrations. .