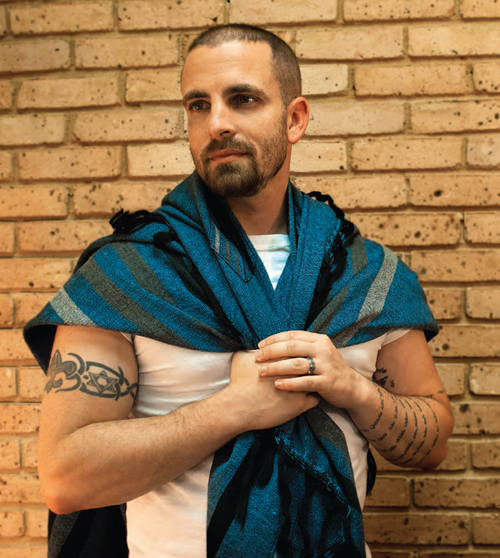 I am a rabbi, proud to affirm my love of Judaism…on my skin.

I got my first tattoo at age 16 after returning from a high school program in Israel. I decided to avow my place among my people Israel by tattooing a small Star of David with a dove in the middle on my left ankle.

To my mother, it was an affront. When I asked her why she was so bothered by it, all she would say was, “Because you won’t be buried in a Jewish cemetery.” Then she went dead silent. That’s when you know a Jewish mother is really upset.

Many years later, I asked her why she had been so adamant against tattooing.

“Regrets,” she said. “Your stepfather has the name ‘Joan’ tattooed on his forearm.”

My mother’s name is Susan. To spare my mother any hard feelings over this former girlfriend, my stepfather wore a Band-Aid over the tattoo for years.

“Unlike piercings,” my mother explained, “tattoos stay with you, affecting future relationships and employment opportunities. As your mother, my job is to set you up for success. Tattoos are a threat to success. I don’t want you to live with regret.”

My mother’s warning that I would be barred from burial in a Jewish cemetery had meant little to me as a teenager, when contemplating my own mortality was so far from my consciousness. Only later did I learn that it was a bubbemeise, an old wives’ tale, rooted in fear and superstition rather than in Torah. This was confirmed to me by Orthodox Rabbi Chani Benjaminson, who wrote: “Nothing in Jewish law prohibits a tattooed person from being interred in a Jewish cemetery. Still, certain burial societies—not the majority of them, or even close—will not do so.”

At age 20, I decided to have my back tattooed with an intricate Tree of Life design complete with Torah scroll (the Torah itself being a Tree of Life) and the words Shema and Echad (a declaration of my faith). As the first person in my immediate family accepted to a four-year university, I felt excited, scared, and confused. Wanting to hold fast to my Jewish roots as I navigated this uncharted territory, I found the perfect metaphor—a tree stays rooted to its source, even as it extends its branches outward.

At the time I was working as a youth advisor for a Conservative synagogue in Boca Raton. Would having tattoos get me fired? I worried. Thankfully the rabbi in charge accepted the decision of Rabbi Alan Lucas, a Conservative authority who wrote, “However distasteful we may find the practice [of tattooing], there is no basis for limiting one’s participation in synagogue. The fact that someone may have violated the laws of kashrut or the Sabbath would not merit such sanctions; the prohibition against tattooing is certainly no worse.”

In 2003, I applied and was accepted to the rabbinical program of the Hebrew Union College-Jewish Institute of Religion. The seminary was looking for passionate Jewish leaders who had a unique and strong sense of purpose. Mine was as apparent as the ink on my skin: building a bridge between our ancient traditions and modern culture, so that people didn’t feel forced to abandon one for the other.

To get the answers to the questions that I would undoubtedly face, I selected tattooing in Jewish history as the subject of my rabbinical thesis—and was amazed by what I learned. From antiquity to modernity, Jews have always found appropriate as well as inappropriate uses for the tattoo.

In the Torah, tattoos marking affiliation to the people of Israel and/or the God of Israel were accepted, if not encouraged, more times than not. (To learn more, read “The Biblical Body as Canvas.”) In the classic rabbinic period, ca. 200–1600 C.E., the rabbis were troubled by ketovet ka’aka (tattoos), defined as “lacerations on the flesh filled with blue dye or [black] ink or whatever color leaves a mark” (Shulchan Aruch 180:1). What bothered them was not the presence or the content of that mark, but its intended purpose. As the following passage shows, while a minority of sages believed that willfully receiving or giving a tattoo was a transgression, the majority objected only when the tattoo served an idolatrous purpose:

In the end, I concluded that our sages did not support a general prohibition against all tattoos because they recognized in the changing world of the diaspora, where cultural norms competed with Jewish values, simple answers rarely suffice. But when we can go deeper than the surface of the skin to get to the very heart of the matter, we see that Judaism—even as it disavowed some tattoos—affirmed that others may have a rightful place within our tradition.

These days, I travel around the U.S. endeavoring to help people frame the topic of tattooing in a more nuanced way. I explain that Jewish teachings are not monochromatic on this issue, but a tapestry of colorful opinions firmly rooted in Jewish historical thought. In this way, I see myself as a conduit between those in the Jewish community for whom tattooing remains a taboo and those for whom tattoos are a way of affirming Jewish identity, faith, and pride.

Rabbi Marshal Klaven, HUC-JIR class of 2009, serves Congregation B’nai Israel in Galveston, TX. Formerly, he was the Director of Rabbinic Services at the Goldring/Woldenberg Institute of Southern Jewish Life.